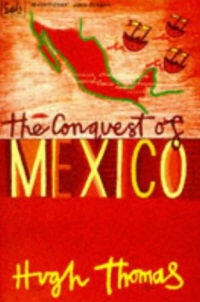 Back in the day I used to go a local pub that had  ‘award winning’ bangers and mash on the menu,  even the staff didn’t know anything about this award, and the meal wasn’t up to much anyway.

The day was sunny, but I was sulky.  This had to do with my usual reading table being occupied, as well as my back up reading table.  Making do with a different view and some less than satisfactory light and shooing away a work colleague who wanted to chat on a day off, I settled down to my book, accompanied by a pint of mediocre bitter.

The book in question was Hugh Thomas‘, The Conquest of Mexico. This is a weighty tome detailing how the Spanish came to the Americas and into great depth on the titular conquest itself.

I slowly became aware of a chap in my peripheral vision who seemed to be bobbing up and down whilst facing my direction.  In the end I made the mistake of looking. He was stood up but was contorting his body in an uncomfortable manner in an attempt to read the title on the spine of my book.

Making eye contact – a big mistake – he decided this was an invitation to join me.  Amiable as I was back in the day, I was happy to chat with someone who showed an interest in books.  The conversation started well as he commented not many people read in pubs, especially in our town. END_OF_DOCUMENT_TOKEN_TO_BE_REPLACED

The remote Mexican village of Jonotla lies in the shadow of the rock of Tlaloc, named for the ancient god of rain whose spirit has dwelt among its inhabitants for centuries. In the mid-1960s the twentieth century finally came to the fifteen hundred villagers of Jonotla—in the form of roads, cars, buses, electricity, and a more competitive form of life. In this moving account Reck sets out to document what effect these changes have had on the villagers. This study is part of the universal drama that is inevitably played out wherever and whenever the past and the future meet in sudden conflict.

There is something wonderful about coming across a book you’ve never heard of, that engages you through the blurb and the fleetingly glanced at sentences.  Then you read it and it so much more than you hoped it would be and is a more than worthy addition to your book shelf.  This is – unsurprisingly – with such an introduction one of those books and needs to be shared with all lovers of life, knowledge and culture.

Mexico, a land of myth and Christianity, the impact point of two worlds collided long ago is the setting and the locals of Jonotla claim to be descended from the same tribe that produced the people who would later become the Aztecs.  This ancient place is one example of another seismic event, the impact of the modern world on a peaceful farming village.  anthropologist Gregory G. Reck uses it as the ideal vantage point to see just how social interactions and cultural heritage changes the mindset and daily life of its 1500 inhabitants.

From the outset I knew this book was going to have some real journalistic merit, it captures the patchwork of life, following a plethora of characters but in the main centres around Celestino, a man with big dreams but less in the way of luck, an average Joe, somebody whom the reader can relate to.  His trials and fears are universal, the struggle for life’s meaning and to have security, to come to terms with one’s own past whilst trying to make something better for ourselves. Throughout the book we get an interwoven sense of longing, apprehension of the future, hope and just occasionally a sense of peace and a glimpse of true happiness.

The arrival of a new and increasingly invasive world is troubling and at odds with what has gone before.  New challenges rock the foundations of Jonotla, a declining population as young people are better educated and wish for more so leave to get better jobs, through to the aggressively competitive male hierarchy that has slowly become the norm and eroded community spirit. END_OF_DOCUMENT_TOKEN_TO_BE_REPLACED 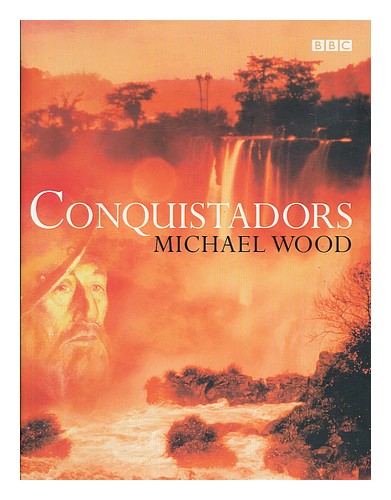 The whole story remains incredible to anyone who has not experienced it first hand.  Indeed, it seems to overshadow all the deeds of famous people in the past, no matter how heroic, and to silence all talk of other wonders of the world. – Bartolome de las Casas, A Short Account of the Destruction of the Indies, 1542

Having missed the series three times purposefully, so it wouldn’t spoil the book for me – I’m just that sort of person – I absolutely loved this and still do now that I flick through its pages, last opened in 2001 sometime. As I have probably said in a review somewhere before, the BBC may have many faults, mainly to do with its extremely top heavy management hierarchy and (mostly) terribly banal programmes but for all that, it does produce a good book.

Conquistadors has all the things you would expect in a book that accompanies a TV series, clear explanatory text that isn’t dumbed down, full colour, highly detailed pictures (I’m referring to the hardback edition here) and a wealth of information that makes you want to explore the world and its history all over again.

Starting with a brief bit on the discovery of the New World, Michael Wood’s lively narrative swiftly transports us to the action of conquering, greed, ignorance and general slaughter that all culminated in great civilisations being decimated to the eternal shame of history.

Set to the back drop of such wondrous places as lake Titicaca, Macchu Picchu, The Andes, Tenochtitlan et al it is easy to see why so many people still fall in love with the exotic and fascinating stories and rumours of lost cities still out there.  Although a bit dated I derive the same pleasure from this wonderful cartoon The Mysterious Cities of Gold END_OF_DOCUMENT_TOKEN_TO_BE_REPLACED

The Conquest of Mexico was a historical event and also a book I have been reading, handily enough I recommend the book as a way into a fascinating subject. Here be the review.

Don’t let the huge number of pages(848) put you off, this is a very readable and thoroughly researched account  of the events leading upto the conquest and the inevitability of the action of conquest. But first to the beginning.  Parts 1 and 2 of the book involve the backgrounds of the two civilizations. For the Mexica(Aztecs) the focus is on the subjugation of and subsequent trade with other people in and around the valley of Mexico and also the domestic classes of people and the Gods which they worship. The religious set up is especially fascinating if you like your myths, as the stories mentioned in the book rival anything from ancient Greece or Mesopotamia.

The Spanish chapter focuses more on the capture of the outlying island of the Caribbean, the brutality with which the indigenous populations were treated and the ruthless commercial opportunism that abounded,  and the first explorations and meetings with the indigenous Peoples of the Yucatan and the Totanacs of Mexico. END_OF_DOCUMENT_TOKEN_TO_BE_REPLACED