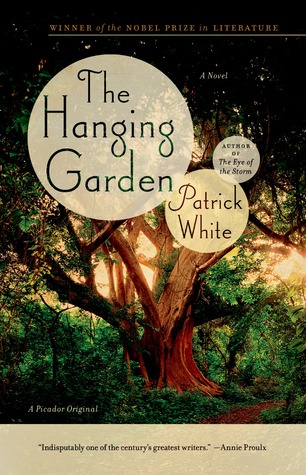 Sydney, Australia, 1942. Two children, on the cusp of adolescence, have been spirited away from the war in Europe and given shelter in a house on Neutral Bay, taken in by the charity of an old widow who wants little to do with them. The boy, Gilbert, has escaped the Blitz. The girl, Eirene, lost her father in a Greek prison. Left to their own devices, the children forge a friendship of startling honesty, forming a bond of uncommon complexity that they sense will shape their destinies for years to come.

Seen through the eyes of the young the world can seem like a distressing, grotesque and thoroughly grey place, especially for children living through extraordinary times and upheavals.

In his last and unfinished novel, Patrick White has the seed of what was to be his final epic.  With the trademark downbeat feeling that he does so well, the themes of longing and melancholy course through this work and punctuate right at the heart of the social ills that society attempts to hide beneath a veneer of respectability.

tonight I am the Meccano set no-one will ever put together, even if all the bits are there.

Class is the epitome of the social disease and this commentary into the nature of the adults is a parody of the respectability and selflessness they portray, the inherent selfishness of human nature, even in good acts is shown to be most farcical in the face of an innocent child’s perception.

the character viewpoint changes rapidly and seamlessly as innermost thoughts are explored in brutal honesty.  At times, the perspective changes once or twice within the same paragraph but never to the detriment of the narrative flow.  The beauty of White’s style is that he leaves you in no doubt about what each character is doing or thinking at any time…in a way his style – for me – depicts the all round complete character portrait. END_OF_DOCUMENT_TOKEN_TO_BE_REPLACED

I tend not to bother with book prizes, mainly because I’m to busy reading and also I hate being told there are books I need to read when most turn out to be disappointing, so further to my (almost) amusing post of book titles that I did a while ago, Pure Art I have been mooching Wikipedia to find something I can blatantly copy and paste for you until I get some more book reviews finished.

Here are the winners of the Bookseller/Diagram Prize for Oddest Title of the Year: END_OF_DOCUMENT_TOKEN_TO_BE_REPLACED

‘In April 2003, a pride of starving lions escaped from the Baghdad zoo during the American bombing of Iraq’

Mooching through the graphic novel section, this excitingly orange cover caught my eye and attracted me to this particular true story.

Following the lions on their quest for escape and safety, we find them meeting other animals and reading some fairly clever takes on how humans do things from an animals perspective.

While the art work is bright and detailed the story lacks any sort of emotional punch. The duration of the story is too short to develop characters or more importantly the sense of a war not understood by animals. The book is fairly thick having said but the art does take precedence over storyline.

What we do get is a pretty shallow, short story which tends to be a bit to preachy about the environment and attitudes towards animals. All very noble but overdone for such a small work, END_OF_DOCUMENT_TOKEN_TO_BE_REPLACED

‘There’s a shipwreck off Kirrin Island! But where is the treasure? The Famous Five are on the trail – looking for clues – but they’re not alone! Someone else has got the same idea. Time is running out for the Famous Five, who will follow the clues and get to the treasure first?’

As a child this was high octane stuff!  It had everything I could want, a sense of danger and adventure, risk and excitement, mystery and discovery, a WHOLE island owned by a child my age! castles, caves, smugglers and a dog to boot!

I reread this a few years ago, for the first time since I was about eight and true it is a little bit dated now and very much a book of its time. The plot is not as sophisticated as say, Harry Potter, (that being the new yardstick with which to measure children’s literature it seems), but there in lies the pleasure of these books.

The first of a series of 21 stories, this book really sets the scene for what is to come throughout the series; straight forward plotting, mysteries, much eating and drinking of nice victuals and usually lovely weather for camping and mystery solving. END_OF_DOCUMENT_TOKEN_TO_BE_REPLACED

The Conquest of Mexico was a historical event and also a book I have been reading, handily enough I recommend the book as a way into a fascinating subject. Here be the review.

Don’t let the huge number of pages(848) put you off, this is a very readable and thoroughly researched account  of the events leading upto the conquest and the inevitability of the action of conquest. But first to the beginning.  Parts 1 and 2 of the book involve the backgrounds of the two civilizations. For the Mexica(Aztecs) the focus is on the subjugation of and subsequent trade with other people in and around the valley of Mexico and also the domestic classes of people and the Gods which they worship. The religious set up is especially fascinating if you like your myths, as the stories mentioned in the book rival anything from ancient Greece or Mesopotamia.

The Spanish chapter focuses more on the capture of the outlying island of the Caribbean, the brutality with which the indigenous populations were treated and the ruthless commercial opportunism that abounded,  and the first explorations and meetings with the indigenous Peoples of the Yucatan and the Totanacs of Mexico. END_OF_DOCUMENT_TOKEN_TO_BE_REPLACED