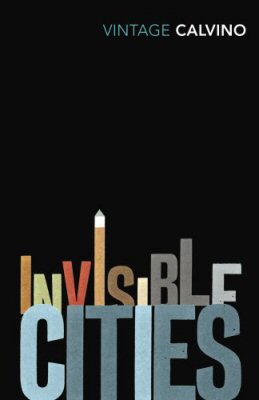 In Invisible Cities Marco Polo conjures up cities of magical times for his host Kublai Khan, but gradually it becomes clear that he is actually describing one city: Venice.  As Gore Vidal wrote ‘of all tasks, describing the contents of a book is the most difficult and in the case of a marvellous invention like Invisible Cities, perfectly irrelevant.’

Given Italo Calvino’s unique way of making each of his books so stylistically distinct from each other, it’s always difficult to pick a favourite, so today I shall claim that it is this book,  as a proper scrutiny of which one is really my favourite could devolve into a complex mess that would involve copious note taking, soul searching and perhaps some prescription drugs.

I suppose then, this review should be set in place in its new category of perfectly irrelevant, at least according to Mr Vidal, but for anyone willing to take a chance on something as creative and compelling as this, then I consider the below squiggles to be perfectly relevant:

You don’t rush Calvino books, with another of his fine works Mr Palomar I spent eight days reading its 128 pages and Invisible Cities coming in at a grand 148 pages took me all of four days to read as I stopped after nearly every page to try to visualise his ideas, I also had some weird dreams too.

The synopsis seems to give little away but in fact it does the opposite, the book consists of conversations both physical as well as metaphysical, between Marco Polo and Kublai Khan. They discuss the big and small concepts of life and these are illustrated through the descriptions of a number of cities. That may not sound the most exciting concept to you dear readers but the way they are thought out and imagined is thoroughly magical.

There are plenty of books that evoke the spirit of past ages when any outlandish stories about cities, peoples and creatures would be believed but it takes a special kind of author who can bring us cynical modern folk back to that age and get us to invest a decent amount of our time in such illusory places. END_OF_DOCUMENT_TOKEN_TO_BE_REPLACED

However badly it manages internal scandals and tries to justify the extremely ridiculous nature of its management structure (and don’t get me started on the quality of some of its programmes), one thing the latterly beleaguered BBC gets right is its History programmes and accompanying books.

As usual with a BBC publication, the lavish use of photographs and small but not to small font gives you the feeling that you are holding a book containing a lot of substance, something you can read right through or dip into, but always something worth keeping and going back too.

Intrepid explorer Dan has travelled the world looking at buildings which have either changed the world or have the capacity to keep us ‘astonished delighted and impressed’ and the selection he as come up with are very varied and always engaging.

Some buildings are naturally familiar the world over, the structures of Pompeii, the Mortuary Temple of Hatshepsut and such like, and allow even the most disinterested person a way to engage in the book, if not in the actual reading but in the many photographs.

Others edifices (edifi?) range from the obscure to the fascinating, such as the Sedlec Ossuary which is home to the bones of over 40,000 people, some of which some have been artistically arranged into chandeliers and other such adornments.  Type that into your favourite search engine and see how delightfully macabre yet visually arresting the place is. But that would be me digressing again.

With a book like this, it enables you to put a new perspective on the form of buildings, something you don’t see in the steel and glass structures of today’s ‘best’ designers.  A celebration of everything from the noble igloo right through to the majesty of Catherine Palace in St Petersburg. END_OF_DOCUMENT_TOKEN_TO_BE_REPLACED

I like doing the odd jigsaw, not the ones with a lot of sky in though.  In fact I don’t mind those so much if there are different hues or clouds or an aeroplane or some such other item of interest to break the monotony of the mass of atmosphere that is just there.  I especially enjoy doing jigsaws that feature the Taj Mahal, but that is a personal preference and should not be used in a psychological profile of me. Just in case any of you doing profiling for a hobby.

Coincidentally enough, I tend to live my life based around the rules of jigsaw, not that I separate the corner pieces out first, although that may help in the long run, but would be rather time consuming.  I mean in the way that I interpret life. Each day we get bombarded with words and images from various media.  In fact noise everywhere, radios, TVs, then there are billboards, magazines, I-Pods and all that other stuff. Isn’t it all just a bit distracting?

The variety of references coming from every direction, does on the positive side always keep our brain active, I mean we have to filter that 90% of superfluous rubish out, all the celebrity news, throwaway pop culture and Saturday night TV.  There is however one stock TV phrase that always seems to pop up, most usually in shows that have some fantasy element and that is: ‘the world is more fantastical than you can imagine’ , which is all well and good until you remember you have work in the morning. END_OF_DOCUMENT_TOKEN_TO_BE_REPLACED

What have I learnt this evening? 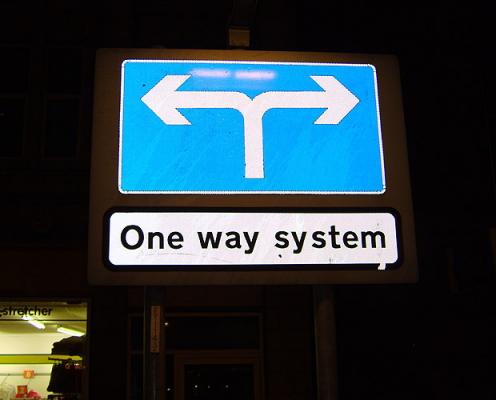 It is always nice to learn things and of course wander about life’s big questions whilst travelling in a car at night, whilst also pretending to be an ultra aware navigator.  The stars are always one thing to consider in their colossally far-off aloofness, the vast distances and amazing nebulae, the abstract concept of the infinite reaches of space and all of that cosmic stuff, but on a motorway all the light pollution unfortunately scuppers the idea of contemplating the wonderful night sky. END_OF_DOCUMENT_TOKEN_TO_BE_REPLACED

The 20th century was, looking back on it one crazy century and Nick Yapp has taken it upon himself to collect photos that chronicle life and its assorted times between the years of 1900 to 2003.

As you would expect all the seminal events are given ample room, everything from the Wright brothers, the Titanic, all the major wars, Nelson Mandela freed, various sporting events etc, (although there’s no room for photos of the victory parade from Mansfield Town FC’s glorious Freight Rover Trophy win of 1987).

But as fascinating as those photos are, my real interest rested in the people pictured in their day to day lives and how, when viewed from a completely unbiased point of reference, they could be interpreted.

To me each photo holds at least a spark of melancholy, either from the faux happy faces masking the strain of fear during the Blitz to the innocuous, such as people posing outside a factor or for a family photo, these latter I can blame on my wild imagination, judging in hindsight about how our society evolved or just some ungraspable element that I have conjured up out of the ether. It’s a hobby of mine, almost a fetish.

Each photo is its own rich memory bank, whether it be of a personal nature to someone who knows the photo protagonists or to the casual observers who just sees the rich and fascinating tapestry of all the ideas and possibilities that each person conjures up.  The mundane becomes fascinating in the viewer’s eyes, these are stories begging to be told.

The inverse of that of course centres around the real tragedies of life. The most appallingly shocking being the Holocaust, something which will resonate forever as one of the darkest times of civilization if that word can even be used in this context.  Looking at those photographs words fail me… END_OF_DOCUMENT_TOKEN_TO_BE_REPLACED

Lets throw chronological order out of the window here by revealing a World Exclusive(!!!!!) for fans of a certain show with four judges on it, that has been imported to a ton of countries to highlight bland pop singers. Liz from Easyjet was on our flight home, it was her last ever flight because she’s going to be famous.  Look out for ‘Airport Liz’ coming to a screen near you soon and remember where you heard the name first.

Right back to the ‘dam, having been woken up by a cacophony of morning noises, the highlights being; spoons thrown into buckets, that mosquito (again), people arguing loudly (usually about 6 in the morning), rubbish being hurled from a great height into metal bins and the least musical array of church bells you’ve ever heard, which incidentally used to go off at 8:20 and 8:50 each day for some bizarre reason. The first order of the day was a shave, for some reason the air in Amsterdam makes my facial hair grow, then we would set out into the unknown, which already seemed familiar as we had  criss crossed it countless times on day one.

on our first day (no rules chronology here) we thought we’d all cram into a nice quiet café and have a meal, the woman serving didn’t seem to pleased to see us but we didn’t think anything of it, having ordered a drink we got a menu then realised with names like the Full Monty, Queen and Princess burgers, we had stumbled into a gay place.  happily we got free mints after paying the bill and the meal filled a hole, so it was probably the best gay bar experience we could have hoped for. END_OF_DOCUMENT_TOKEN_TO_BE_REPLACED

I’m really sorry if my writing is poor today but I’ve just come back from Amsterdam where nine of us went for a stag/bachelor party.  Excluding a school trip to Italy this is my first time away from England and also my first time flying, which is apparently the safest mode of transport there is. That’s what the man next to me said when he started a conversation then rapidly put his headphones on after I talked at him incessantly through my own white knuckle fear. Which wasn’t helped by the pilot telling us what to do if he shouts ‘Brace Brace’ in a doomed voice.

My first thought on going up was, ‘this is just plane wrong, haha, but seriously it’s not natural to be that many thousands of feet up in the air whilst trapped in a plastic tube, that incidentally had duct tape plastered all over the one wing that I could see. Nervous was an understatement but I was okay when I got over the cloud cover and I had no depth perception. I’d like to apologise to all the people who overheard and got bored by my nervous and constant chatter. END_OF_DOCUMENT_TOKEN_TO_BE_REPLACED