I have returned after a wonderful wedding and honeymoon week.  Photos will be coming soon of course, there have been so many posted on Facebook already and once the official ones are through, there will be a couple of posts coming up with the photos that really encapsulate the day.  Until then here are a few photos – in no particular order –  of my travels so far.

A visit to a beach – especially these beaches – in the company of wonderful people is always good. Added to great food, swimming at night, a thousand stars in the canopy of the sky and a super moon; followed by paddling about in the morning and enjoying the view of the sun glinting off the clear water, it was perfect…except for the grimmest toilet and shower facilities I have encountered in a long time.  Eagle eyed viewers will recognise the beach as being just a stone’s throw away from the beach I went to last year Costa de Oro.

Intramuros (within the walls) is also known as the Walled City, so being because the Spanish built the wall in the 16th century to protect themselves from attack in those days when it was a remote outpost of the Empire.  The span of this fortifications is impressive and there are still some cannons lining the walls as well as a sign warning about flying golf balls from the local course. There is a fascinating bookshop amongst other things in this part of Manila, which tempted me with lots of local literature.  One day I will be back for handfuls of that, as there seemed to be some enticing and powerful works waiting for my eyes.

Twin Lakes is a picturesque spot overlooking Lake Taal (which contains the second most active volcano in The Philippines, although Mt Mayon is stealing all the headlines at the moment), here we spent some time photographing, the wind was a bit chill and we had other places to go so didn’t enjoy any of the places to eat whilst taking in the view.  We didn’t really explore the resort but it was nice just to take in the clean air and the natural beauty of the area.  The highlands of Tagaytay are considered cold, with the average minimum temperature for January being 18 degrees.  The wind keeps it feeling cool sometimes but is considered pretty cold for Filipinos.

A local street, just around the corner from our house, captured by Crissy in one of the more peaceful moments.  Usually the streets teem with life, children playing, people hawking their wares or chatting.  I love the atmosphere. although being used to my own company, sometimes it is difficult to adapt to the constant cacophony of commotion.  To hide when the mood takes me, I usually put on some tunes, letting YouTube autoplay me to some whimsical place for a short while. 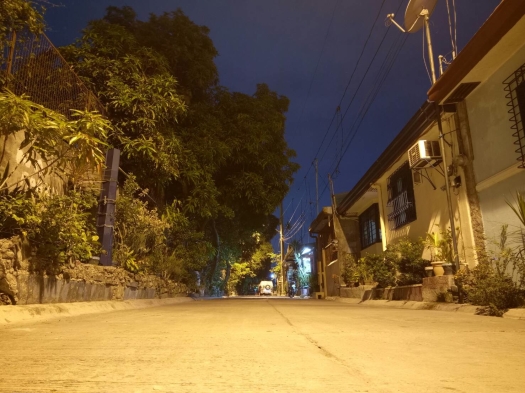 Finally, the other day I ended up helping a cat get comfortable to give birth, it was a tense time as I was home alone and it isn’t even our cat!  Thanks to the internet I learned some cat birthing facts and now we have three healthy kittens and mother.  Crissy and I have named them, despite not knowing their sex as Mr Bean, Mr George, and Mr Boffles, the latter of whom already enjoys gangster movies, Gustav Holst’s Mars, the Bringer of War and the music of Louie Armstrong.

A huge thanks is due to many people for these adventures; my mum and dad, and Tom for coming across for the wedding, as well as experiencing the above adventures with Crissy and I.  My new Filipino family for their relentless and wonderful kindness and hospitality, for driving us around and being tour guides, for taking hundreds of photos and for speaking English despite constant ‘nose bleeds’.