Just behind (or in front of depending on your orientation) these particular remnants of the Berlin Wall the museum building  stands. it’s a modern cube that sits (it changed position between sentences) surrounded by wide open spaces and to the right of it are two art galleries and the home of the Berlin’s State Parliament, not too long ago the situation was very different, as this location once – as a handy plaque informed us:

housed the most important institutions of Nazi terror:  the national central headquarters of the Secret state Police (Gestapo), The Reich SS leadership, The Security Service (SD) and the Reich Security Main Office 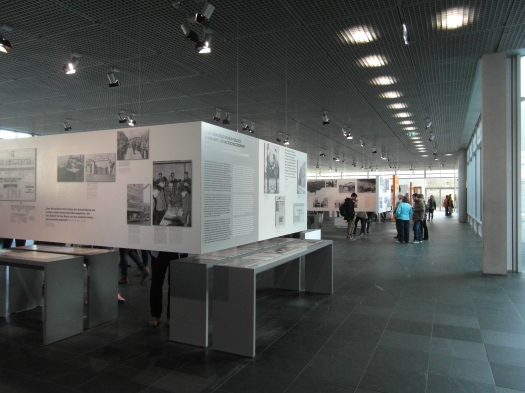 The open and airy lay out of the gallery is a good thing as the reading material is at best challenging.  It shouldn’t be, I’ve read plenty of history books and I’m familiar with the appalling numbers of casualties, of the terrible fates suffered by innocent people, of the mass slaughter and cruelty and senselessness of it all and yet when on such a site as this I just couldn’t read about these events.

It is considerably harder to reconcile these events than usual when, where you happen to be makes it tangible, visceral, much more real.  With propaganda films and footage of executions, photos aplenty and sickening headlines in papers it was all a bit too much for me. it was plenty shocking, sickening and gruelling to the point where I had to sit down on the many handy benches to write some notes.

As a consequence I did skim read certain sections and others had titles that were enough to conjure up long forgotten memories of things I had read and I skipped past them.  The part about how words were used to sanitise despicable events and make them seem more palatable to the general populace made it worse, especially for the writer in me and one who watches the news and sees that nothing has changed to this day.

Whilst taking a breather for the second time due to the shared sense of the oppressive atmosphere , I stopped to people watch and take in all faces.  There was a grimness to my fellow museum goers, a contemplative revulsion to what they were seeing and reading, yet each one was compelled to carry on and do their utmost to get around the often harrowing exhibits as best they could.  From listening to the quiet chatter there were more nationalities there than I could distinguish, this place of learning brought on a communal revulsion and discomfort.

The whole museum does an excellent job of capturing the palpable imprint of terror.  The staggering amount of the dead and displaced and the multitude of departments overseeing everything in minutiae of life in the occupide zones was quite frankly hideous in its conception, let alone execution. 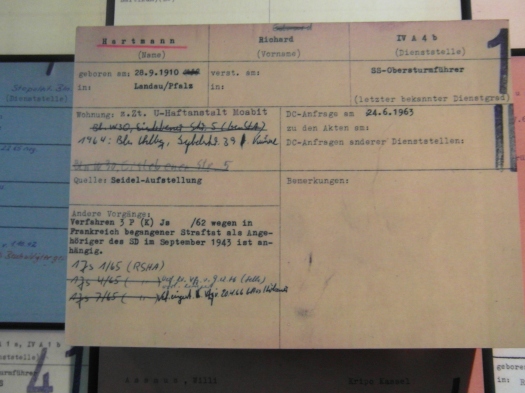 The above photo is one of the many index cards (below) from the investigations into the Reich Security Main Office personnel of which relatively few received any sort of sentence. The lack of justice was perhaps the bleakest thought I left with and sadly will leave you with as well.

46 Replies to “The Topography of Terror”