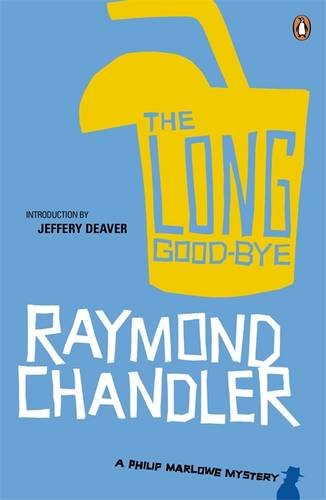 Down-and-out drunk Terry Lennox has a problem: his millionaire wife is dead and he needs to get out of LA fast. So he turns to his only friend in the world: Philip Marlowe, Private Investigator. He’s willing to help a man down on his luck, but later, Lennox commits suicide in Mexico and things start to turn nasty. Marlowe finds himself drawn into a sordid crowd of adulterers and alcoholics in LA’s Idle Valley, where the rich are suffering one big suntanned hangover. Marlowe is sure Lennox didn’t kill his wife, but how many more stiffs will turn up before he gets to the truth?

This is by far Chandler’s most ambitious novel, doubling the size of its closest rival it’s exceptional example of noir detective literature and one I was most impressed with.

This is the sixth of the seven Marlowe novels – which can be read in any order – and is certainly the strongest.  This is a mature book showing the author getting to grips with the underside of American morals or lack thereof in some quarters.

At some point it became trendy to give the sleuth of any book or TV show  a drink problem or be a single parent or other such obstacles to ‘doing the job properly’ but Marlowe manages to be a fascinating character without these contrivances.  Chandler creates truly flawed characters,not just as a way to control the plot but to question the aims and thoughts of the individual and his or her place in society.

‘Alcohol is like love,’ he said.  ‘The first kiss is magic, the second intimate, the third is routine.  After that you take the girl’s clothes off’.

He’s a loner, an intellectual, although he would not admit it, a lover of Chess and drinking.  He has his ethical code and will stick to it, he does what is right (even if it doesn’t pay) and is capable of deep cynicism yet surprisingly, a strong sense of sentimentality.

As our narrator, he approaches each setting and character as a detective would, he observes and picks out what is important, there is no need for anything but the facts.  This sparse style doesn’t detract though as I think everybody has the images of LA in he 50’s firmly implanted in our heads from various films and books that we can fill in the blanks ourselves.

There is much fun to be had with the hard-bitten one liners, the Chandlerisms if you will.  The author’s similes are ice-cold and always highly entertaining,  it really gives even more class to such an iconic character and gives the atmosphere a darker feel. It’s dry and unsympathetic yet fits into the world perfectly, he is undoubtedly an author you will enjoy quoting and probably relish in the pessimism of his words.

The slow burning nature of the plot suits the leisurely and sleepy feel of the L.A portrayed, although there is a sense that the luxury and sleaze could explode at any minute, It feels very edgy and believable.  The intricate plot is full of secrets, revenge, injustice and ambition, it’s a scathing indictment of the morality and integrity of America and the ills of society which still holds true all those years on.  Crime literature doesn’t get much more penetrating than this.

I caught the rest of it in one of those snob columns in the society section of the paper.  I don’t read them often, only when I run out of things to dislike.